The Sphere L22™ microphone system from Townsend Labs models the characteristics of the most sought-after large-diaphragm condenser microphones with amazing accuracy and allows selection of different mics and patterns even after tracking.

Sphere’s three-dimensional  approach captures the spatial nuances, proximity effect and off-axis frequency response of a wide range of microphones, which until now was not possible with any other product.

Because Sphere captures the three-dimensional response of target microphones, it precisely emulates the polar patterns and other off-axis characteristics of vintage microphones which are essential to their unique sound.

Record In Stereo (With One Mic)

With just one Sphere L22 mic it’s possible to make coincident stereo recordings, and even have different mic models on the left and right channels, using the Sphere 180 plug-in.

This acoustic guitar track was recorded with one Sphere microphone and processed only using the Sphere 180 plug-in first with the LD-47 and then with the LD-12 mic model.

Virtually rotate the axis of the mic to give a more off-axis sound before or after tracking.

Create more accurate polar patterns to reduce bleed, room coloration, and susceptibility of feedback before or after tracking. For more information see the Off-Axis Correction chapter in the Sphere Hardware and Software User Guide.

The Sphere plug-in features a visually informative (and very cool) Polar Meter that dynamically displays the direction and level of sound being picked up by the microphone, as well as the currently selected polar pattern.

The microphone hardware has a self-noise level of 7dB-A SPL, well below most vintage microphones and comparable to many of the best modern microphones.

The L22 can handle in excess of 140dB SPL before clipping and is remarkably rugged. It won’t be damaged by high SPLs or air blasts as some vintage microphones can be.

Sphere L22 Microphone – high precision, dual-capsule, large-diaphragm condenser studio microphone, which can be used with or without modeling

Townsend Labs was founded by Chris Townsend and Erik Papp.

Erik led Summit Audio for ten years as CEO and owner before the company was acquired by Blue Microphones. Summit produces high-end mic preamps and other outboard gear. At Summit, Erik also launched and distributed various products including the Lauten line of microphones and the Bricasti reverb.

Previously, Chris worked at Avid (parent company of Digidesign) for 13 years doing DSP programming for Pro Tools and related software plug-ins. He was also a key developer of the Eleven guitar amplifier modeling and the ReVibe room modeling technologies.

The WA-8000 is a nod to a very special large diaphragm tube condenser microphone that made its way onto countless platinum recordings starting in the early 90s and continuing today. The sound of this mic has delivered hits for artists ranging from Dr. Dre, Mariah Carey, Boyz II Men and Brian McKnight to Eminem, Rihanna, Drake and more.

The VideoMic Me-C is a high-quality microphone for your USB-C mobile device, designed to give you incredible audio when shooting video. The microphone's directionality reduces surrounding noises to focus on exactly what you're filming, ensuring your videos sound clear and intelligible. 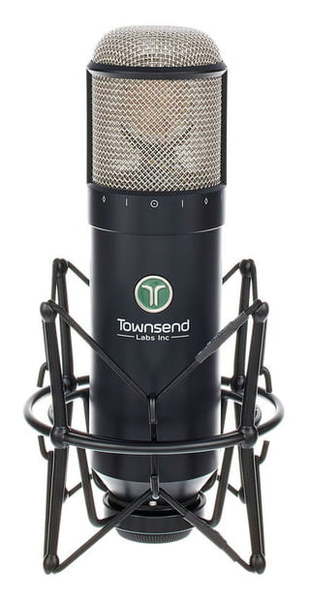 Townsend Labs Sphere L22
The Sphere L22 microphone modeling system comprises this precision dual-channel microphone, plus an audio plug-in for your DAW. The software plug-in does all of the DSP processing used to create the microphone models.