Crimson combines an audio interface with high-quality preamps and a fully-featured monitor controller. You can play and play back, record and convert, control and listen with one single device.

So all you essentially need for a professional recording start-up is the Crimson and a DAW.

Crimson is designed to operate with your Digital Audio Workstation. But you can also do a lot with it as a stand-alone device: plug in an instrument and play. Connect a microphone and sing along.

Mix your own monitor signal with playback or guide tracks from any source – including your smartphone. What you are playing is not bad? Turn on the DAW and record it.

The Crimson leaps forward to set a new sound quality benchmark in its price range. With the Crimson you have a boutique device at a fraction of the price we used to know from traditional engineering and manufacturing.

Milestones of the company’s R&D history were

You’re on the run after some big news. You need to be quick and practical, but most importantly, you need to capture a great story.

Being the centerpiece of the Recording Pack, the UR22mkII allows you to record and compose music in studio quality on your laptop or iPad.

Your complete recording solution The all-inclusive, full-on production toolkit to get you producing your first ...
Любими
400,00 лв.

The most popular guitar interface of all time just got better - iRig 2 is the answer.

Описание The most popular guitar interface of all time just got better How do you improve upon something so ...
Любими
65,00 лв. 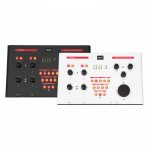