Play and record at a higher level

The leaders and pioneers of mobile music making now bring you another breakthrough in mobile guitar interfaces — the iRig HD 2, the next generation of the immensely popular iRig HD interface.

iRig HD 2 gives you a totally new level of mobile playability with intuitive new player-centric features like high-quality 24-bit/96kHz audio, an integrated headphone out with level control, a new Amp out jack with switchable output, full versions of AmpliTube for Mac, PC & iOS, plus total mobility and connectivity for playing anywhere, any time. iRig HD 2 fits easily in your pocket and connects directly to your Lightning and USB devices – so no matter which iPad, iPhone, Mac or PC you have, you’re ready to rock at a moment’s notice. There’s no complicated setup – just plug in and play. Do a quick study of the guitar interfaces out there and immediately you’ll see what we mean by a “higher level”. Only iRig HD 2 gives you so many player-centric features in such a compact, affordable and professional level mobile guitar interface. And, since we pioneered the mobile music revolution and invented the mobile guitar interface way back around the dawn of prehistoric smartphone times, we know a few things about playing guitar on the go. When we say, “a higher level,” we mean you simply won’t find better with this many features and this much value. Ready to play and record at a higher level? Read on…. First and foremost, iRig HD 2 simply sounds amazing. It features superior digital audio quality with premium 24-bit A/D converters and a 96kHz sample rate — the highest in its class — for a crystal clear digital signal that’s free from noise and crosstalk. This pure high resolution conversion lets your guitar’s natural performance tone come through loud and clear when playing and recording on your iPad, iPhone, Mac or PC. It’s super-transparent preamp ensures that every nuance — from the pickups, wood tone, string size, nut material, electronics, and every other reason you picked “that” guitar in the first place — is accurately communicated to your device with zero coloration or interference. And because of it’s 96kHz sample rate, the depth and clarity of your sound will simply floor you — iRig HD 2 sounds amazing.

Amp Out with dual mode switch One of the things that makes the iRig HD 2 unique is the ability to send your processed signal directly to a guitar amp without the need for special conversion adapters. iRig HD 2 features an unbalanced 1/4" Amp Out jack that you can use to send your processed or unprocessed guitar signal to an external amplifier, floor tuner or completely different rig setup for live performance. The Amp Out jack features a dual mode switch allowing you to choose what type of signal you want to send to your amp. The “FX” setting sends your processed signal, or the sound coming out of your software/app to the external device. This is perfect when you want to use your iPad or Laptop as your effects pedalboard, your amp’s front end or complete tone rig in a live setting.

The “Thru” setting sends your guitar’s dry, unprocessed signal directly to the out jack, allowing you to use a floor-based or rack tuner, a pedalboard or even an additional full-on stage rig.

Plus as an added performance feature, iRig HD 2 has an integrated microphone stand “clip” and Velcro strap so you can secure it to a mic stand on stage for live performance. If you’re contemplating upgrading to the latest and greatest iPhone, then listen up. iRig HD 2 sports a new 1/8" (3.5mm) headphone jack with preamp and level control integrated into the unit so you can monitor your recording and playing… even if your device doesn’t feature a headphone jack. Pretty smart.

But this is no ordinary standard “headphone” jack — it features a high-resolution headphone preamp that optimizes the audio signal for full range playback and monitoring. You can also use this output to send a stereo signal out to a mixing console or a pair of powered monitors like iLoud Micro Monitor.

Need tone? Got tone! iRig HD 2 is the only guitar/bass interface that comes with full versions of the industry’s top selling tones studio software and apps. It comes with full download versions of AmpliTube 4, the hyper-realistic guitar and bass tone studio for Mac/PC, and AmpliTube for iOS, the number one amp and effects app for iOS. A total value of over $/€ 160! Read more about AmpliTube for iOS

Read more about AmpliTube 4 for Mac/PC

Plus, you can add to your amp and effects lineup with the full range of IK AmpliTube collections and gear like AmpliTube MESA/Boogie®, AmpliTube Orange®, AmpliTube Slash and AmpliTube Jimi Hendrix™, the Fender® collection and more via in-app purchase on iOS devices and with the AmpliTube Custom Shop feature in AmpliTube for for Mac/PC.

Use iRig HD 2 to record with other music making apps like Apple’s GarageBand and Cubasis, and all your favorite recording software like AmpliTube 4 (included with iRig HD 2), GarageBand, Logic Pro, Cubase, Pro Tools, Studio One and more for Mac/PC. Use the iRig HD 2 anywhere you play guitar – on the go, in the studio or on your home computer with no complicated setup — just plug in, play and record at a higher level!

iRig HD 2 at a glance

One interface – everywhere you play iPhone, iPad, Mac or PC — iRig HD 2 works everywhere you do. All the cables you need to connect it to the latest devices are included, and iRig HD 2 is class compliant so it works with all your devices and computers. Got an idea? Start it on your iPad, finish it on your Mac — same great tone.

For the ultimate mobile guitar and bass playing experience, use the iRig BlueBoard wireless MIDI foot controller to control all the features and functions inside of AmpliTube from the floor. And for extended playing sessions with your iOS device on stage, use iRig HD 2 with the iRig PowerBridge to keep your device charged for the whole night.

iRig HD 2 will free your mind from the confines of tradition and inspire you to be your creative best. Break away from the past and enter a whole new world of mobile guitar playing — get the iRig HD 2 and take your playing to a higher level. Описание In most cases the Е44 is an excellent substitute for the LynxTWO. LynxTWO 192 kHz multichannel audio ...
Любими
317,00 лв. 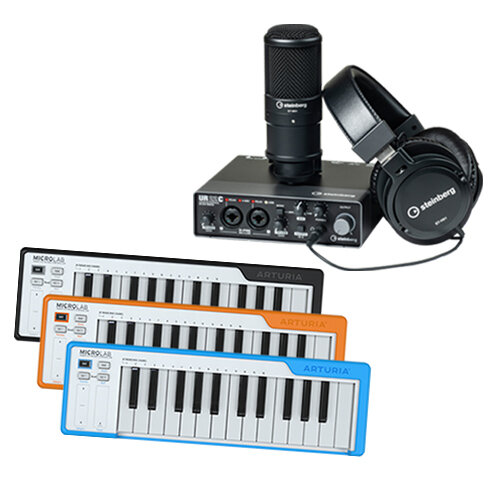 MicroLab is a small, smart 25-key controller that ticks all the boxes. You don’t need to install complex drivers, it comes with great software to get you started, has a great-feeling keyboard, and has loads of smart design features. 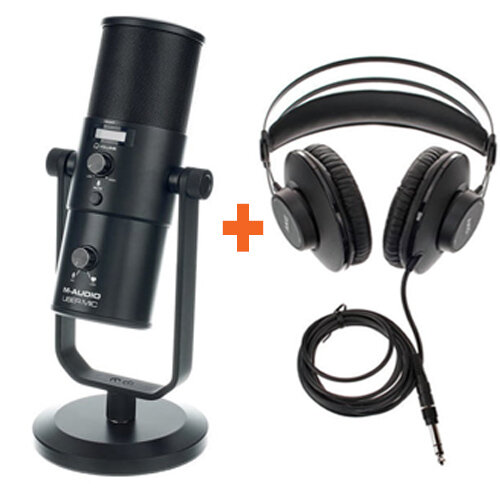 Описание   More connectivity than you can shake a stick at. With mioXM™ it’s never been easier to ...
Любими
443,00 лв.

IK Multimedia iRig HD 2
The leaders and pioneers of mobile music making now bring you another breakthrough in mobile guitar interfaces — the iRig HD 2, the next generation of the immensely popular iRig HD interface.